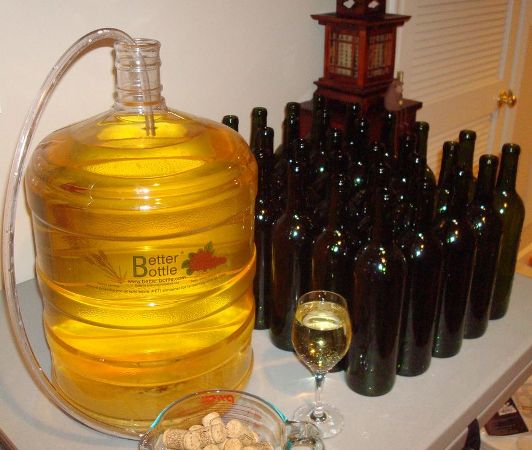 Wine, widely appreciated as a beverage with low alcohol content, finds various uses. It works its magic as a flavor agent in various cuisines. In addition, it finds favor as an accompaniment to cuisines ranging from the European to the Mediterranean. Wine accentuates the flavor of a main dish and also works wonders in the form of a dessert wine. Wine, in general, is prepared by fermentation of grapes with yeast. Other kinds of wines known are prepared using fruits such as apples and berries and are consequently named after the chief ingredient in use.

Considering the immense popularity and widespread use of this beverage, it would indeed be great if the drink could be prepared at home. This is very much possible by duly following the steps as mentioned below and taking due care to take some precautions.

1. Select the ingredient to use in the wine

Grapes, apples, ginger root, raisins are used in general. Remove the pits in fruits. Chop and crush. Do not use blenders that make a pulp of the fruit. This helps avoid making the wine bitter. Crushing fruit skin and seeds can affect the taste of the wine.

2. Sterilize the ingredients with Campden tablets

Pour the crushed ingredients into the wine fermenter. Opt for the fermenter as per the amount of wine being prepared. In a six Gallon polyfermenter put five Campden tablets. Add these after putting in the pulp in a fermentation bag and bringing the mixture to five gallons with water. Cover with a thin cloth and leave the mixture as such for a day.

4. Collect the partially fermented wine after a week

Decant the partially fermented mixture into a carboy. Remove the fermentation bag. Press this with hands to collect the liquid in the carboy. Do not stir the sediment settled at the bottom. Try to collect as much liquid as possible leaving the sediment at the bottom of the fermenter. Bring the solution back to the five gallon mark using water.

6. Use hydrometer to test the progress

Hydrometer gives a clear indication of the amount of sugar in the wine. A value between 0.990 and 0.998 means that the fermentation is complete and wine can now be bottled for use.

Pour the liquid into a bottle. Ensure that no portion of the sediment at the bottom gets transferred to the bottle. Crush and add five Campden tablets. Add a stabilizer such as Potassium Sorbate. You can also store for later use.

What are the xs energy drink reviews?

Which food and drinks should definitely be...

How can I incorporate the most popular...

How can I make apple fruit beverage...

Why do my kahlua drink recipes taste...

Can the apple and cranberry sauce be...

In what amounts rockstar energy drink should...