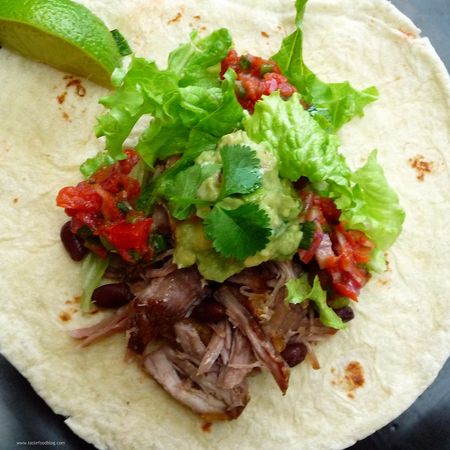 Introduction: Taco is a Mexican dish, which is made by filling various kinds of meat and vegetables in tortilla or in prefabricated shells. The taco is a great source of proteins, carbohydrates, and essential minerals. A taco can be filled with pork, beef, chicken, or seafood like prawn. Apart from the non-vegetarian items, tacos are also filled with lots of vegetables and red kidney beans. One can also choose a wide array of vegetables to fill in the taco.

Recipe: The origin of tacos has been traced back to the valley of Mexico. Several anthropological surveys indicate that people of this region ate tacos filled with fish. Tacos can be prepared in many ways but here we give you a description of making a tangy and spicy citrus pork taco filled with pulled pork cooked in lemon and orange juice. The sweet flavor of the caramelized vegetables combined with the tangy pork gives the dish a very unique and mouthwatering taste, which is the main reason behind its immense popularity.

1. Set your oven to 400 degrees Fahrenheit to allow it to get heated up. Then wash the pork loin nicely under running water. Soak the water from the pork by patting it with a paper towel and then keep it aside.

2. Once done, season the pork nicely on all sides by rubbing a little bit of salt and pepper on it. Let the pork sit on a plate for some time. In the meanwhile, place a saucepan on the hob. Light the flame and set it on medium high. Put some oil into the pan and let it heat up.

3. As soon as the oil starts forming smoke, put the seasoned pork into the saucepan and sear it on all sides. The pork will change its color from pink to brown. Cook the pork until completely browned and nicely cooked. Then add the lemon juice, orange juice, limejuice, Mexican dried oregano, cumin, onion, and the cloves of garlic to the pork. Finally, pour-in the chicken stock and cook on medium high heat until the sauce comes to boil.

4. Once it starts boiling, remove it from the stove and transfer it to a baking tray. Cook the pork in the oven for one hour. After sometime, take out the pork, and then pull and shred it with two forks. Now take a bowl and add all the root vegetables, thyme sprigs, and red onions to it. Sprinkle some canola oil, salt and black pepper over the vegetables. Then hold the bowl and toss the vegetables to season them nicely. You can also do the tossing with two spoons.

5. Once done, spray a nonstick baking tray with the cooking spray and spread out the tossed vegetables in the tray. Arrange them in a single layer to facilitate proper cooking. Then insert the tray in the preheated oven and roast the vegetables for 40 minutes. The vegetables should become a little crispy after proper roasting.

Something bizarre for a bizarre stomach

Can you tell me about some cookbooks...