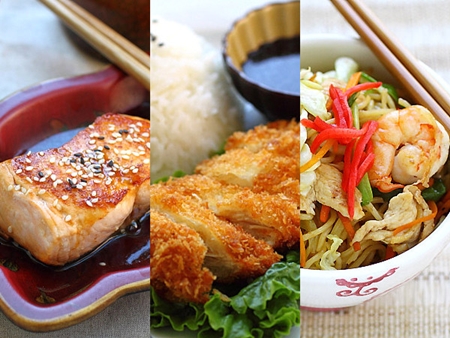 Did you know that Japanese women live for an unusually high average of 85 years and the men 79? These rates are higher than any other country on the face of the earth. On the other hand, Japan is also a country which did not encounter obesity problems till they were infiltrated by western ‘junk’ food. Even now they are the world’s number 1 ‘less obesity’ country and suffers very less from heart diseases. Yet, most Japanese do not go on diets!

The secret is their food, which combines longevity and excellent health while keeping a check on your waistline. Just what many need! Though little known, Japanese diet is extremely healthy and combines the energy of food into small and joyful sizes. The energy dense food like chocolate and potato chips are replaced by less energy dense ones like fruits and veggies in the Japanese diet. Lesser calories, carefree life seems to be the Japanese foodie motto!

A peep into a traditional Tokyo kitchen will tell you that there are seven ‘secrets’ to this amazing diet. Read on discover them!

A diet is often characterized by the ingredients it uses. The most favored Japanese ingredients that will manifest in your meal are broth/soup based on soy products (Miso), a small bowl of rice served with iodine rich sea food or other fish, along with vegetables and a dessert made of fruit slices. Japan has a huge rice foundation and rice is served in almost every meal. Eating large amounts of fish leads to consumption of less red meat, all leading to lesser cholesterol and trans fat. Perhaps this explains why the Japanese suffer less than most countries from heart diseases and deficiency of iodine. Vegetables and fruits are less in calories and are not energy dense. All these automatically subject you to a slim waistline, yet providing you with fulfilling and tasty meals.

In a traditional Japanese meal, food is served in small plates and serving dishes. Diners will take their turns to eat from them. Research shows the benefits of this practice. When you are served on large plates or in large quantities, you tend to simply eat it all even if you are not hungry! The Japanese secret is to simply fool your brain into thinking that you have had enough by making the serving dishes look smaller and the amount of food larger! Clever right?

3. Feed your eyes with foodie beauty

Just as important as it is to keep your food portions small, the Japanese also give equal significance to the beauty of food which is served. Apart from aesthetics, this is not just a pointless custom. Beautiful servings will make you stop and savor the food, i.e.,they will make you eat with your eyes. The point of it? By enjoying your food and eating slowly, you are actually sending signals to your brain that you are eating enough and that you are full. Viola! That would make you eat less and stay fit!

Your breakfast will be powered by Miso soup. Miso is nothing but fermented soy beans. Soy products, when used within good limits, prove to be excellent sources of protein and a good alternative to red meat, which contains damaging constituents like cholesterol and trans fat.

5. Rice is your bread

Every Japanese meal, including breakfast includes a small bowl of rice, a complex yet low fat carbohydrate. The motive behind this is that it would leave you with less stomach space for damaging, fat rich foods like cookies and chips. The amount of rice consumed by the Japanese is about six times the amount consumed by an average American. Choose brown rice over the white and serve without oil or butter to adopt the Japanese foodie plan.

A typical Japanese salad would offer fruits and vegetables peeled, sliced, chopped or any way you like, on a pretty plate. A small cup of green tea is considered the perfect end to a meal. Western desserts like cakes and ice cream are also enjoyed by the Japanese but…in smaller portions and much subtler flavors than in the west. The secret seems to be to keep it small if it is calorie high!

Yes. You read that right! But not so fast there! Japanese people eat what they like but in small portions. Dieting and depriving themselves are alien to them. All they do is keep it small! Clever clever Japanese.

Japanese food is amazing for your health and longevity. But unfortunately it is little known. Now that you are aware of the secrets of Japanese health, go ahead and implement their food secrets!

Subtle facts you probably did not know...

Ethnic cuisines that are beloved in the...

Why does my basic inari sushi recipe...

Can anyone help me to avoid oil...

Miami, once known for Cuban food, is...

Do you think pastrami on a roll...