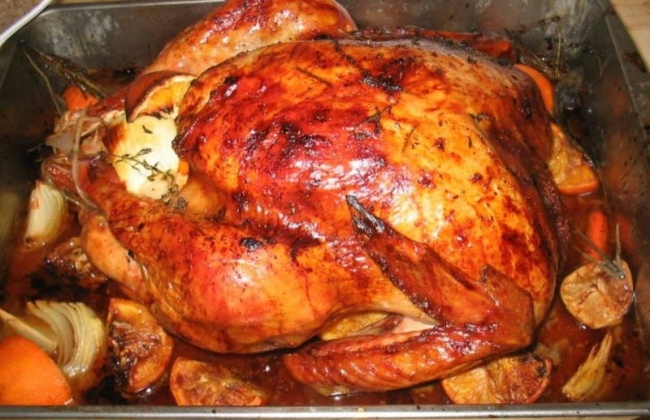 Christmas is approaching, the festival of giving. Most countries have traditional Christmas dishes, but the most favorite dish around the world for Christmas is a roasted turkey. There is no documented evidence or origin of the dish. Turkey is low in fat, also rich in iron and zinc, which are very good for our body. 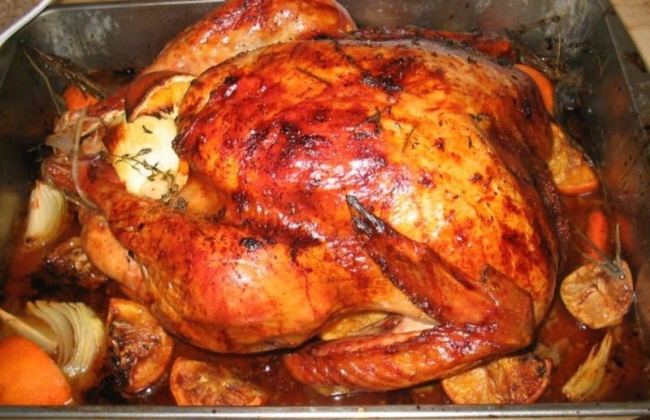 3. Stock from boiling up giblets

1. The night before roasting the turkey, remove the goblets and neck for the stock. This stock is to be used for preparing the gravy. The removed matter is to be added in a pan with lots of water, cooked for at least 4 hours on low heat.

3. Trussing the bird after stuffing is a good idea, as it retains the stuffing and keeps everything neat. Since the legs take longer to cook, it is always a better option to stuff the skin and breasts, increasing the thickness, which helps the cooking time to become uniform.

7. Initially blast the turkey at 200 degree C for half an hour and then for rest of the cooking settle at 180 F.

9. For checking if the turkey is done or not, use the fattest part to spear.

10. Using a foil over the turkey to keep it moist is a good idea, but remove it at the end to crisp up the skin.

1. Chop the potatoes the way you like them. But before chopping, peel them clean. In a big pan of boiling water, cook the chopped potatoes for five minutes.

2. Then drain the water and shake the potatoes for a couple of minutes with the lid closed.

3. In the roasting tin, put some goose fat. Put it on the blob at high heat.

4. As the fat splits, add one potato at a time and coat them well in the fat.

5. Add salt to taste and shake them till they are slightly brown.

1. All juices are carefully decanted from turkey, once it is cooked.

2. The juices are set aside for preparing the gravy.

3. The turkey is then put back to the plate, along with the roasted potatoes, back into the oven.

4. The juices are poured into the roasting tin and the heat is turned to medium.

5. To the boiling juice, flour is added and mixed thoroughly.

6. Hot stock is added along with water from the boiling vegetables. The consistency of the gravy is brought to a certain level and cooked for some more time.

7. To the gravy, add salt to taste and pepper for seasoning.

8. Decant the gravy in a ceramic jug.

Does anyone know about veg food recipe?

Turn your vegetables into butter with these...

Which style of cooking could be used...

Name a yogurt smoothie recipe which does...

Where can you find a really nice...

How to make easy Sweet and Sour...

Is butter chicken one of the sanjeev...

Want to know about a vegetarian recipe...

Which monster energy drinks are best with...