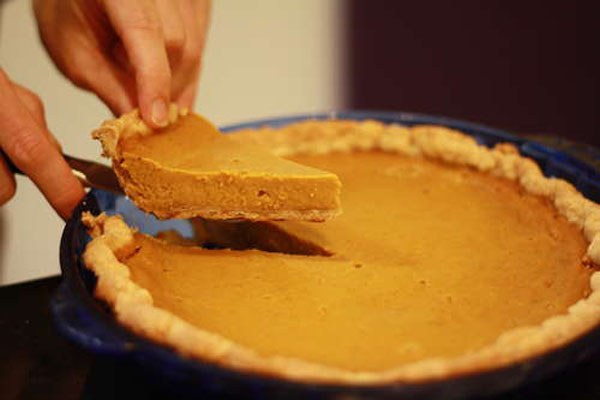 Recipe: How to make pumpkin pie with cream

Originally from Northern America, this pie is a traditional sweet dessert thought of during the initial winter season (the harvest time that is signified by pumpkin) in the United States of America and Canada for Thanksgiving and Christmas. Pumpkin was introduced to the European settlers by the American Indians. After being enlightened about the versatility of pumpkin, they started using pumpkin in both sweet and not so sweet (savory) dishes.

In the fast innovative world of today, pumpkin pie has evolved into single crust pie filled with custard like pumpkin batter filling, cream, milk, sugar, eggs, and spices like cinnamon, ginger, and cloves. There are so many different ways to make your pumpkin pie even more delightful. One of these is to sprinkle some crushed ginger snaps and pecans over the pie crust before baking. Yet another way to make an entirely different pumpkin pie is with vanilla ice cream. Creeping out of the chilling winters, here is a lip smacking pumpkin pie recipe wishing you a Merry Christmas for all those pumpkin pie lovers.

In a bowl, mix the softened ice cream, pumpkin puree, cinnamon powder, nutmeg powder, brown sugar, and cloves, and beat it with an electric beater until batter is smooth. Pour the batter in the graham cracker crust and smooth the top with a flat spoon. Refrigerate it for over 3 hours or until it becomes a little tough. Top the pie with thawed whipped topping. You may also add pecans to the toppings. Refrigerate again until the topping sets. Cut the pie in pizza shaped pieces and serve with caramel sauce.

To prepare graham cracker crust, mix 1Â½ cup of graham cracker crumbs, 3 tbsp of white sugar and 1/4 cup margarine in a mixing bowl. Pour the mixture ad press firmly into prepared pan. Freeze for 1 hour or until firm or bake I an oven for 375 degree F (190 degrees C) for 10 minutes or until edges are brown. Cool it before filling.

Take care while beating the batter for the pie, as over beating might lead to cracking the pie.

Recipe: How to make pumpkin pie with cream was last modified: July 30th, 2012 by Always Foodie

What are some simple birthday party food...

Where can I find the online food...

How can I make homemade thanksgiving stuffing...

Which rice dishes, recipes can I cook...

Can I attempt the traditional wine making...

Is starting with the spanish cuisine by...