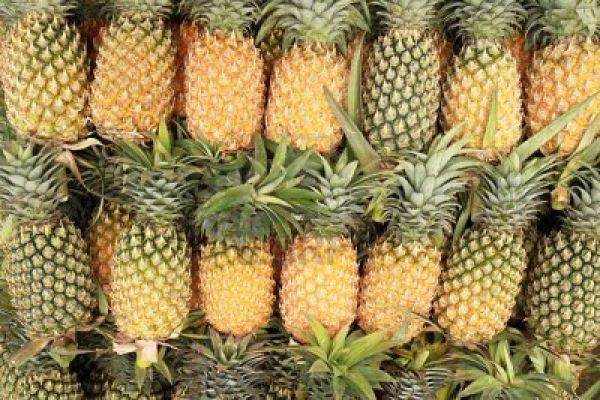 Food Facts: Pineapple a day can keep doctors at bay

Pineapple is known as Ananas comosus scientifically. It belongs to the family Bromeliaceae, and genus Ananas. It is a tropical fruit, and the plant is known to be drought resistant. The long oval cylindrical fruits are borne and harvested during the months of March to June. The fruits have a scaly skin which is green, brown or yellow in color. They are cylindrical in shape, and bear a crown of blue green leaves, which are sharp and needle tipped. 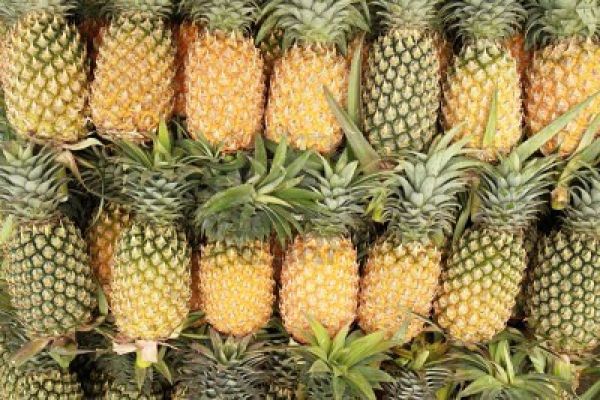 The flesh is juicy and generally yellow in color, they have an exotic mix of sweet and tart taste. It is a multiple fruit. Individual fruitlets fused together around a central core gives pineapple its characteristic shape and look. The âeyeâ on the surface of the fruit is actually each fruitlet. They are among the most favorite fruit around the world.

Pineapple is believed to have originated in South America, but this fruit was introduced to the Europeans around 1493, by Columbus from the Caribbean Island of Guadalupe. The need for a tropical climate for its cultivation probably led the Portuguese and Spanish explorers to introduce them in their colonies all over the world.

Canned pineapple is the commonest method of pineapple consumption. The best ones are skinned, cored and sliced tastefully before canning.

Undersized or overripe ones are cut in chunks, âSpearsâ, or cubes. Surplus pineapple juice is used in preparation of beverage like crushed pineapple juice, concentrate and other preserves. This is done mostly after extracting âbromelainâ, which has lot of medicinal values. The residues from the pineapple processing is crushed and given a first press for canned juices, or utilizing them in other forms in the food and beverage industry. The skin juice, found from the second press is used to produce vinegar or alcohol.

In Africa Salads are prepared from tender shoots. Tender shoots are sold as âhijos de pinaâ in Guatemala. Terminal bud and the inflorescence are cooked or eaten raw. Filipinos use fermented pulp to make a popular sweetmeat- nata de pina. Malays use them in making various curries and dishes.

But the most favored way of pineapple consumption is eating it fresh, as dessert or salads. Pies, cakes, or garnishing ham is also common. These days there are many cross culture dishes cooked with pineapple flavor, pineapple Pizzas being one such favored dish.

a. Pineapple is rich in Cysteine proteinases ( a group of protein digesting enzymes) and Bromelain. Together they have a lot of health benefits. Included as a dietary supplement they are known to reduce tumor growth for certain types, reduce excessive inflammation and excessive coagulation of blood.

b. Pineapple is rich in vitamin C, which is body`s primary anti oxidant. Pineapple thereby helps in defending the body from free radicals that may cause damage normal cells. They also help in preventing infections and help in proper functioning of the immune system. Pineapple was once a favorite among sailors to prevent scurvy.

c. Pineapple is also rich in Manganese, a trace element that is an important dietary mineral. This element helps in producing energy through certain enzymes, as well as antioxidant defense. Vitamin B or Thiamin is also abundant in pineapple, which acts as a co factor in energy producing enzymatic reactions.

d. ARMD or age related macular degeneration, responsible for general loss of vision in adults may be delayed or arrested with a regular pineapple serving in the diet.

e. Vitamin B1, Vitamin B6, trace elements, amino acids, Copper and dietary fibers present in Pineapple, also adds to the food value and effectiveness of Pineapple.

a. The leaves of pineapples are a rich source of a strong fiber. The thread is very popular among shoemakers. Some communities also use it for stringing jewels, whereas some for weaving clothes. Fine casting nets can also be made using these fibers.

b. Pineapple juice was used for cleaning machetes or knife blades with sand. It was also used to clean and scrub boat decks with sand in earlier times.

c. Pineapple crown is also used as animal feed. Mixed with some other food elements, they make an excellent and nutritive fodder.

d. The green leaves of pineapple can be crushed and the resulting juice can be an excellent pest repellent, which is very much environment friendly.

e. Pineapple has been an ancient natural medicinal plant in many civilizations. They are known as an antidote for seasickness, and sore throat. They also help to relieve diuretic problems and known to initiate labor.

f. Pineapple is also used for treatment of venereal diseases, and treating intestinal worms and its leaves are also used as laxatives.

a. Though pineapple is not an allergic fruit and contains almost no residue of pesticides, still always checking before consumption is necessary. Moreover its anti clotting property makes it a fruit to be avoided during pregnancy.

b. Pineapple is one of the best fruits to be included in diet, and some workers are claiming it to have fat busting properties too.

Why organic foods are more healthy?