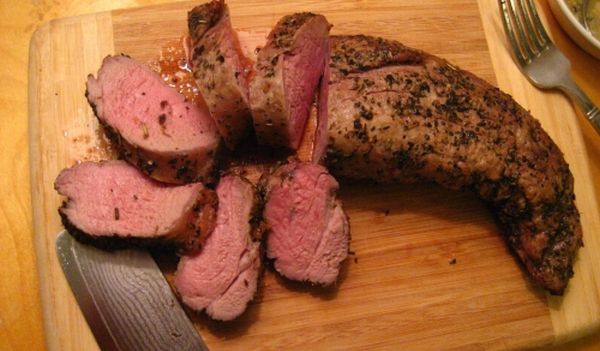 How to oven cook pork tenderloin

Jamaican jerk pork recipe is a oven grilled pork recipe which has been originated from Jamaica. Jerk pork is believed to have a part of African cuisine when the maroons introduced it to the Jamaicans and it has been improvised by them with their special ingredients and seasoning. The smoking of meat has two purposes, one that it keeps the insects away once it is smoked and the other reason is it can be preserved for a longer time. This process also introduces a strong smoky flavor to the meat. One theory about the origin of word jerk is from the Spanish word “Charqui”, which means dry meat. As time flew, this word “Charqui” changed to “Jerky” to “Jerk”. Another theory is that pork is cooked by jerking holes in the raw meat before cooking hence the word jerk . The jerked pork is then rubbed with seasonings and rubs.

1. Chop the onions and garlic. Put in a blender along with peppers.

2. The next step is to make the jerk sauce and for this you have to put all the ingredients in the blender except the pork and blend well to form a good sauce.

3. Cut the pork up in to smaller pieces. Jerk the pork, that is poke the pork with a fork to create small holes.

4. Rub the sauce that was made earlier on the jerked meat but save some for using it later as a dip.

5. Let the pork be marinated well and absorb all the juices for one whole night in the fridge.

6. Grill the meat slowly in the oven until it is cooked and you can remove it in between and brush it with the remaining of the jerk sauce.

7. Serve with festival, salad and the jerk sauce left over for dipping.

1. Preparing pork tenderloin in the oven is a great way to keep in the flavor of the pork and provide the family with a lean, nutritious meal.

2. Try different rubs and seasonings to enhance the flavor of the pork.

3. Try to marinate the pork in the marinade mixture for an overnight in the refrigerator. This way it will absorb the rub much better. Marinades can be as simple as garlic and olive oil. Or, try a more dazzling marinade or teriyaki marinade.

4. Be sure to cook all pork thoroughly and evenly, make sure it is not raw.

6. Prepare the pork tenderloin for the oven. When the oven is in preheat mode you can use this time to prepare the pork. Aluminum foil sheet should be placed in the baking tray with the shiny side up. Now place the pork in the center.

8. When the pork tenderloin has been removed from the oven allowed to rest for a while, then you can put some salt on the pork and you can also put some pepper on it. In order to make this a complete meal you can also serve it with veggies you like.

So, the process of cooking pork tenderloin is simple and easy, and it tastes great.

Can I add spam and pitted maraschino...

Will you help me make a variation...

Can somebody help me with some easy...

Are there any easy to prepare Indian...

How do I sculpt with the rice...

Chowder for the chills: Manhattan style with...

How do I make the ground beef...

Which mediterranean cuisine recipes of drihnks do...