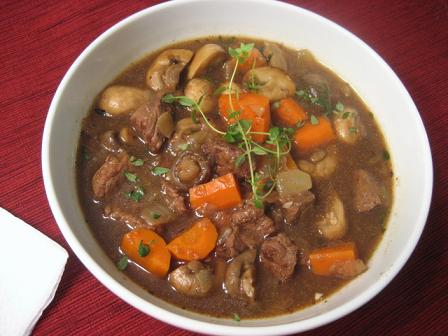 Beef stew bursts with flavor; the rich texture of beef saturated in a delicious broth invites tingles on the tongue. A dish is considered beef stew when it includes beef and a liquid base for the meat to be cooked in. Many different recipes of beef stew exist around the word, differing according to geography, recipe and tradition. This is the easiest recipe for diners to relish the succulence of cooked beef.

2 lbs of boneless beef chuck (the best kind of beef to cook) cut into 1-inch cubes with the excess fat removed.

Can anyone tell me about Indian food...

Any good Christmas food recipes that I...

What are some good and irresistible starter...

What all alcohol and wines can I...

Will adding halibut and mahi mahi to...

How can I experiment with persian cuisine...

Why did my curry sauce with coconut...